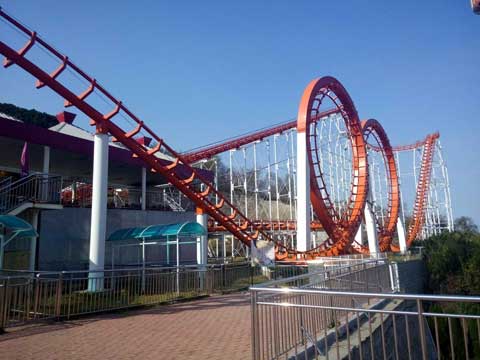 Four-loop Roller Coaster, one of the most popular amusement ride for amusement park, theme park use. More and more people want to play thrill rides in the amusement park. Try this new and big four-loop roller coaster ride now!

Beston four-loop roller coaster consists of the overhead rail, traction system and trains, etc.,traction engine gives power to the train, when moves to the highest point, it automatically decoupling slide, with a large angle down thrust, vertical roll and spiral rolls, when sliding, tourists can feel the height, speed, down thrust, weightlessness and overweight, and also experience heavy centrifugal force. Its main characteristics are: safe and reliable, good ornamental, strong stimulation, large carrying capacity, high cost performance. It can be treat as land mark equipment of the amusement park.

When riding on the four-loop roller coaster, sometimes we dive and go down, and sometimes the electric shuttle, the roaring roller coaster is one of the projects that young people love. The train was lifted to the highest end of the track, and immediately turned into a 360° free high-speed taxi along the track, and the tourists sat comfortably on the seat, stimulating without any panic.

If you are interested in our roller coaster, feel free to send us your inquiry now. We will reply you in 24 hours!

Related Roller Coasters You Can Buy:

Get a Free Quote

Related Roller Coasters You Can Buy: